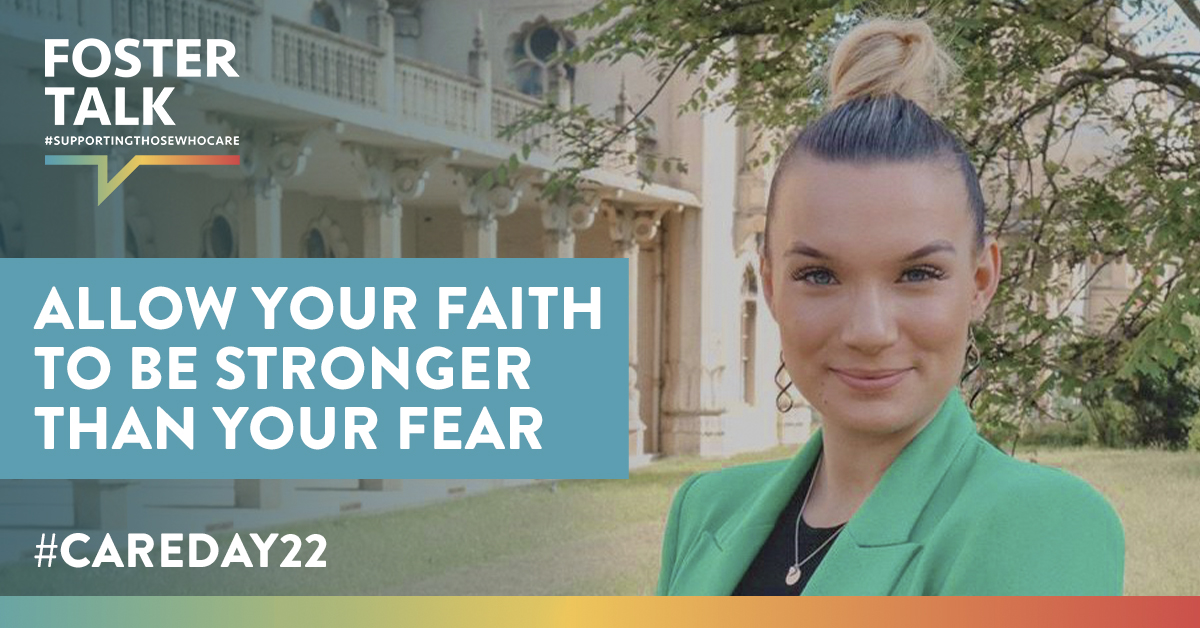 Allow your Faith to be Stronger than your Fear

Previously published in our Autumn 21members magazine, FosterTalk editor Laura Smithers spoke to Gemma Creamer about her life to date and where her desire for the field of law came from.

This is the second edition of our ‘Real Lives, Real People’ series. I was lucky enough to catch up with Gemma Creamer to discuss her life story so far and how a childhood film (Legally Blonde) shaped her career choice in law and her own self-development.

Gemma is currently in her second year at university studying law at Greenwich University and has the world at her feet. It’s not often I speak to someone who instantly gives the impression that they can achieve anything they set out to do, but Gemma is doing just that. As she shares her story, Gemma comes across as confident, knowledgeable, and warm. It was inspiring to hear her life story to date on how she’s turned an incredible personal loss into a vehicle to achieve all her dreams (and she has lots!). 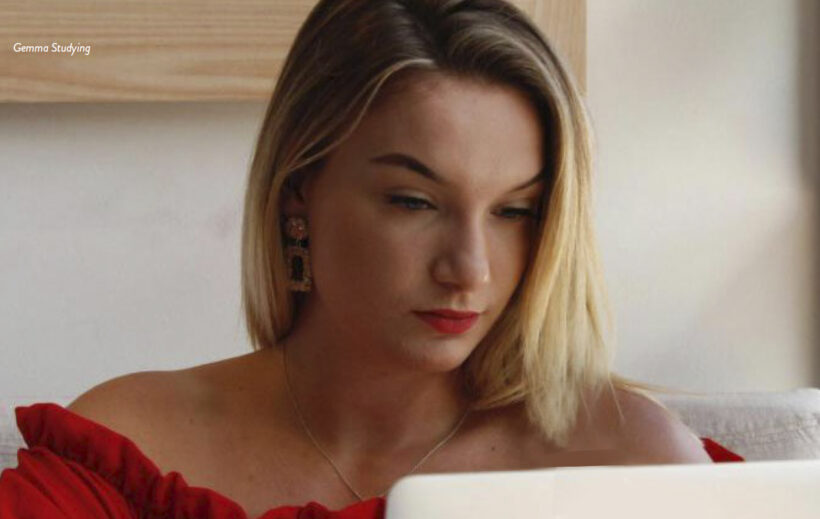 She uses her knowledge and first-hand experience to benefit others, to advocate for care experienced individuals by volunteering her time to her previous local authority (Brighton & Hove City Council) and in doing so, enabling the next generation of care leavers to not suffer the similar disadvantages that she did. As an expert by experience in the role, Gemma sets out to help improve the current support systems in place that enhance the lives of young people in care. She said, “The reason I do a lot of work with the local authority is because I’ve seen the benefits of having a good advocate, and I’ve suffered the disadvantages of having a bad one. I want to ensure that young people in care do not face some of the hurdles that I did – especially when they can be easily avoided. I want them to achieve all they can and go even further than they imagined, and if I can use my voice to make that happen – I will.”

She faced extreme loss at a very young age. From the age of nine years old, three key people in her young life passed away, within very close succession to each other. Firstly, her mother, who one night went to sleep and didn’t wake up.

Then her grandfather and her Nan, both of whom she was extremely close to. In amongst all this, Gemma’s relationship with her father broke down and it was no longer safe for her to live at home at which point she was taken into foster care at the age of 14. She said, “I was very lost as an individual at that time, it was a nightmare I kept praying to wake up from, yet it didn’t feel like it was going to happen any time soon. For the first time, I felt the feeling of loneliness like never before”. Gemma said that she “always looks back at going into care as the point in which she truly lost herself, but in time it was where she resurfaced – stronger and more determined than ever”.

How does someone turn that level of childhood trauma into positivity? What keeps them going when things get tough? What is their driving force to get through life? How do they visualise a future when their foundations of love and security have suddenly gone?

Her first placement at the age of 14 lasted just three months but didn’t work out. It was with a single lady that hadn’t parented or fostered before who wanted a young girl to nurture, but Gemma had grown up very fast and was older than her young years presented. The boundaries set didn’t work, so she was placed with a new family.

Being a foster carer isn’t for everyone and isn’t easy. Regarding the fundamental qualities needed to be a foster carer, Gemma said, “They need to have passion – a passion to not only be the missing piece of a puzzle that every young person is looking for, but a passion for always showing up as best as they possibly can.

They need to care – care enough for that young person and their dreams and be determined to believe in them until they make them happen.”

Gemma has said that her driving force and constant pillar of support, her “rock” since 14, has been her foster Mum, Shelley. Gemma was placed in Shelley and Nicolas’ care over four years ago. Originally this was meant to be a two-week respite after her initial placement, but it turned into her forever home and was a real turning point in her life. Gemma said that she didn’t have any particular issues that she needed support with, that a lot of other young people do, when going into foster care. She said, “All I wanted was stability – someone to come into my life and stay, to never give up on me and to love me unconditionally.”

Her loss early on in her life could have severely affected her ability to grow emotionally and mentally but she’s instead used it and turned it into drive and determination to succeed.

I asked what advice she would give her nine-year-old self now if she could, she said, “Don’t ever give up. I would tell myself to always allow my faith to be stronger than my fear even at times where it doesn’t seem possible – everything will work out just as it’s meant to. I would tell myself to make the most of every moment while it lasts, never take the simple things for granted, and always say how you feel – no matter what. I would tell myself never to be afraid of what could go wrong and to take every chance and opportunity whenever it presents itself.”

On the subject of her career choice in law and what drew her to this area, she said, “I have always wanted to be a lawyer from a very young age. One of my first inspirations was the film ‘Legally Blonde’. Some may see this as a cliche, but to me, the film had many underlying messages within it. 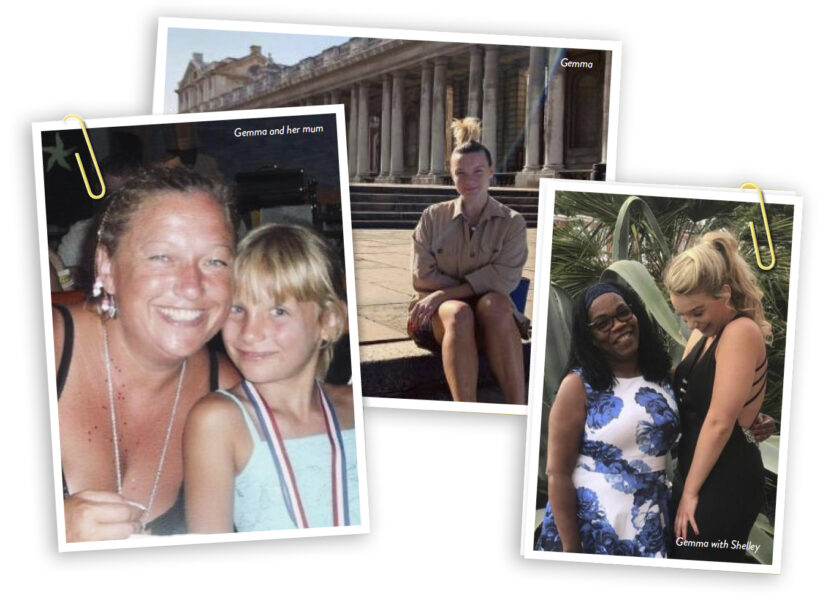 “A woman unafraid to stand out from the crowd or speak her mind regardless of people’s perceptions upon what she has to say. It taught me not to judge a book by its cover, to believe in yourself and your ability, to work for what you want regardless of whether people believe in your dreams or not and above all, to never allow your past to determine your future.”

She said: “When my mum died, and I went into care, when everything seemed to be stacked up against me, I took the route than I knew would have more twists and turns than I could begin to imagine. But I knew it was the only route to success and the life I had always dreamed of having for myself and the family I will eventually have. I have never allowed anything or anyone to come in between me and my dreams and I have always been driven to create a better future than my past has been.”

“I want to share my journey to show how you can turn adversity to an advantage – each and every time so long as you believe in yourself and your own abilities.”

When asked what advice she’d give to those going through a similar journey to the one she’d experienced, Gemma said: “Know that this will not be your forever situation. Your past does not determine your future, but only you can ensure that to be the case. Know that you are worthy of everything just as everyone else is, and you are just as capable of making your dreams a reality.

“When you get yourself out of that situation, and you look back, you’ll see everything which happened led you to where you are now. If my mum hadn’t died, as sad as it was, if I’d never have been in care, if I hadn’t had been through what I’d been through, I might not be pursuing a career in the law or be sat where I am today.”

“When you get yourself out of that situation, and you look back, you’ll see everything which happened led you to where you are now. If my mum hadn’t died, as sad as it was, if I’d never have been in care, if I hadn’t had been through what I’d been through, I might not be pursuing a career in the law or be sat where I am today.”

Watch this space! Like Gemma, we have a vision of what we’d like to see created for care leavers. We’re looking forward to bringing our vision to life; with the support of Gemma and her wealth of experience, knowledge and determination, we’re sure we’ll succeed to improve the lives of children and young people coming through the care system.

#CareDay22 is the world’s largest celebration of the rights of children and young people with care experience. Find out more about how you can support Care Day here

Never miss a story! FosterTalk members get to read our articles and features first, in our quarterly members’ magazine and monthly newsletter.

← Previous: Keeping Siblings Together in Care Next: Living With Lisa – Helping with Hygiene →
We use cookies on our website to give you the most relevant experience by remembering your preferences and repeat visits. By clicking “Accept All”, you consent to the use of ALL the cookies. However, you may visit "Cookie Settings" to provide a controlled consent.
Cookie SettingsAccept All
Manage consent